Given the diverse group of stakeholders to be involved in your Citizen Observatory, maintaining motivation can be a significant challenge. Fortunately, there are many ways in which you can help keep stakeholders motivated and involved in the process.

Identify incentives and barriers for engagement

When engaging Citizen Observatory members over time, a major pitfall can be the mismanagement of expectations. If expectations do not align with what actually happens, both during and after the activity, participants might become disappointed, even if the overall experience was not bad. It is therefore good to be aware of possible incentives that can be offered and barriers that may need to be addressed in order to ensure that the various stakeholders remain motivated to participate in the Citizen Observatory. 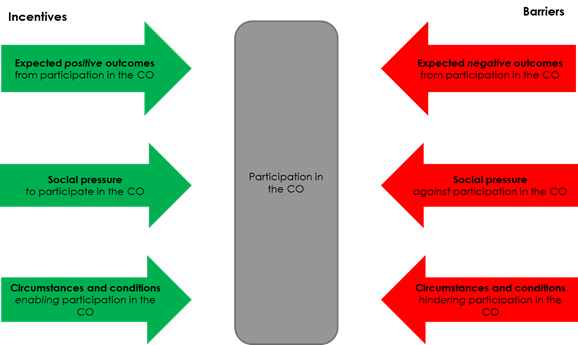 An analysis of the incentives and barriers for participation in the “Meet Mee Mechelen” Citizen Observatory (focused on air quality monitoring) showed that the citizens, scientists and decision-makers had clearly differing motivations and expectations: the citizens wanted to effect change, policy-makers wanted to collaborate with citizens in innovative ways, and the scientists wanted to gain experience with citizen science in order to move on to new projects. Clashes in their respective incentives systems affected their continued engagement in the observatory. For example, decision-makers were hesitant to share the air quality monitoring results with the public due to concerns about scrutiny and public pressure to act. The citizens were sceptical about the likelihood that their monitoring efforts would make a difference. The key aspect that ensured continued participation of citizens was evidence that the Citizen Observatory’s measurement results were being used and were helping to create change: public events were set up to disseminate and discuss the results, and air quality was placed high on political as well as policy agendas. On the other hand, the decision-makers needed to see relations with citizens in the Citizen Observatory shift from perceived ‘civil activism’ towards collaboration and partnership. Finally, the scientists involved in this Citizen Observatory were participating on a project basis, rather than for the long run. Their key motivations were to gain experience in citizen science and establish business partnerships that could open doors to new projects in this field. Responding to these different motivations required deliberate efforts by the community managers, including careful facilitation of meetings and steering towards clear agreements among the Citizen Observatory’s stakeholders.

Lessons learned from the Landsense project 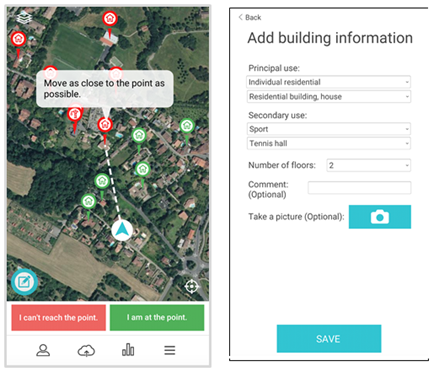 One of the aims of the LandSense project was to mainstream the use of data collected from Citizen Observatories, as this would contribute to lowering the costs of producing scientific information on land cover and land use. One of the LandSense partners, the French National Mapping Agency (IGN), in collaboration with IIASA, developed the Paysages mobile application (shown below). The intended participants were the citizens of the city of Toulouse. One of the app’s incentives was gamification, and another was its appeal to citizens’ altruistic motivations to take part. However, the developers found very little uptake or interest from the citizens. This was partly because the in situ data collection (meaning that participants were directed to specific locations to collect data) required a considerable amount of effort. Even IGN staff testing the app reported that this was an issue. Based on this experience, IGN then changed its approach. It combined armchair-style mapping with targeting authoritative users of the land use land cover product instead of lay citizens, because the former had a vested interest in the product being as up to date as possible. This underlying motivation resulted in participation being much higher. Moreover, since many authoritative users have expert knowledge of land use and land cover, it also meant that familiarity with these concepts was higher. The key lesson learned was to match the motivation for the data collection task with the right stakeholders.

Use of Personas and Scenarios

In user-centred and service-oriented design, a ‘persona’ is a character that represents a potential user or stakeholder, and a ‘scenario’ is a user story that encapsulates the context, motivation and engagement in an activity. These concepts can be useful in developing in-depth understanding about core stakeholders and potential service users and their motivations for participating in your Citizen Observatory. This knowledge can then be used to help guide the identification and engagement of key stakeholders that align with the issue’s context and the Citizen Observatory’s aims. Personas and scenarios can be developed from the following steps, and are presented in text through visual materials:

Personas and Scenarios the GROW Observatory

Persona and Scenarios in the GROW Observatory

GROW undertook interviews and gathered feedback with different stakeholder groups around issues and concerns relating to soil health and moisture. Stakeholders included policy-makers, and a range of citizens who had concerns about land management, technology, education, health and soil moisture for growing food.

PROJECT REPORTS: This Ground Truth 2.0 report explains how stakeholder engagement strategies used in different Citizen Observatories in Europe and Africa were based on the incentives and barriers of different stakeholders.

SCIENTIFIC PAPER: This paper presents an integrated overview of the incentives and barriers of citizens, scientists and decision-makers relating to participation  in Citizen Observatories or similar initiatives.

I want to engage stakeholders…

…by understanding the context and identifying key stakeholders

…by learning how to work with various types of stakeholders

This page partially draws upon the MOOC Citizen Science Projects: How to make a difference, though the focus was shifted from citizen science projects to Citizen Observatories.