Not everybody is acutely aware of the environmental issue that your Citizen Observatory is focused on, and they may not realise what the longer-term implications are of continuing with ‘business as usual’. Using your Citizen Observatory’s results to raise awareness among the public can generate interest in, and understanding about, the environmental issue at hand and create the foundation for substantial and prolonged changes (see sections ‘Behavioural change’ and ‘Policy change’ below).

There are various ways to raise awareness among the wider public that can be applied by Citizen Observatories. These include informing the media and holding public events to share, disseminate and discuss the results of your monitoring activities and how they relate to the specific environmental issues your Citizen Observatory is focused on, as well as the general communication activities presented here.

Participants of the Making Sense project in Barcelona use the Future Newspaper Tool to decide on which actions they would like to take. © Making Sense

Example from the Making Sense project

During the Making Sense project, a group of community champions wanted to find out about noise pollution in Barcelona, their home city. After they discovered that they were regularly being exposed to unhealthy levels of noise, they wanted to create a public action that illustrated the problem of noise levels in the city. Using the Future Newspaper tool they imagined a world in which their data was already actionable. They envisioned an event where people could visually see the noise levels in their community. This became the Noise Box, an interactive public intervention that hooked a sensor up to an LED strip which would light up and turn from green to red when the ambient noise picked up by the sensor went over the World Health Organisation’s recommendation of exposure.

They brought the Noise Box to the streets of Barcelona and used it as a way to engage with lots of people on the issue of noise pollution. This is a great creative way to use the sensors and data to communicate with others about the problem! 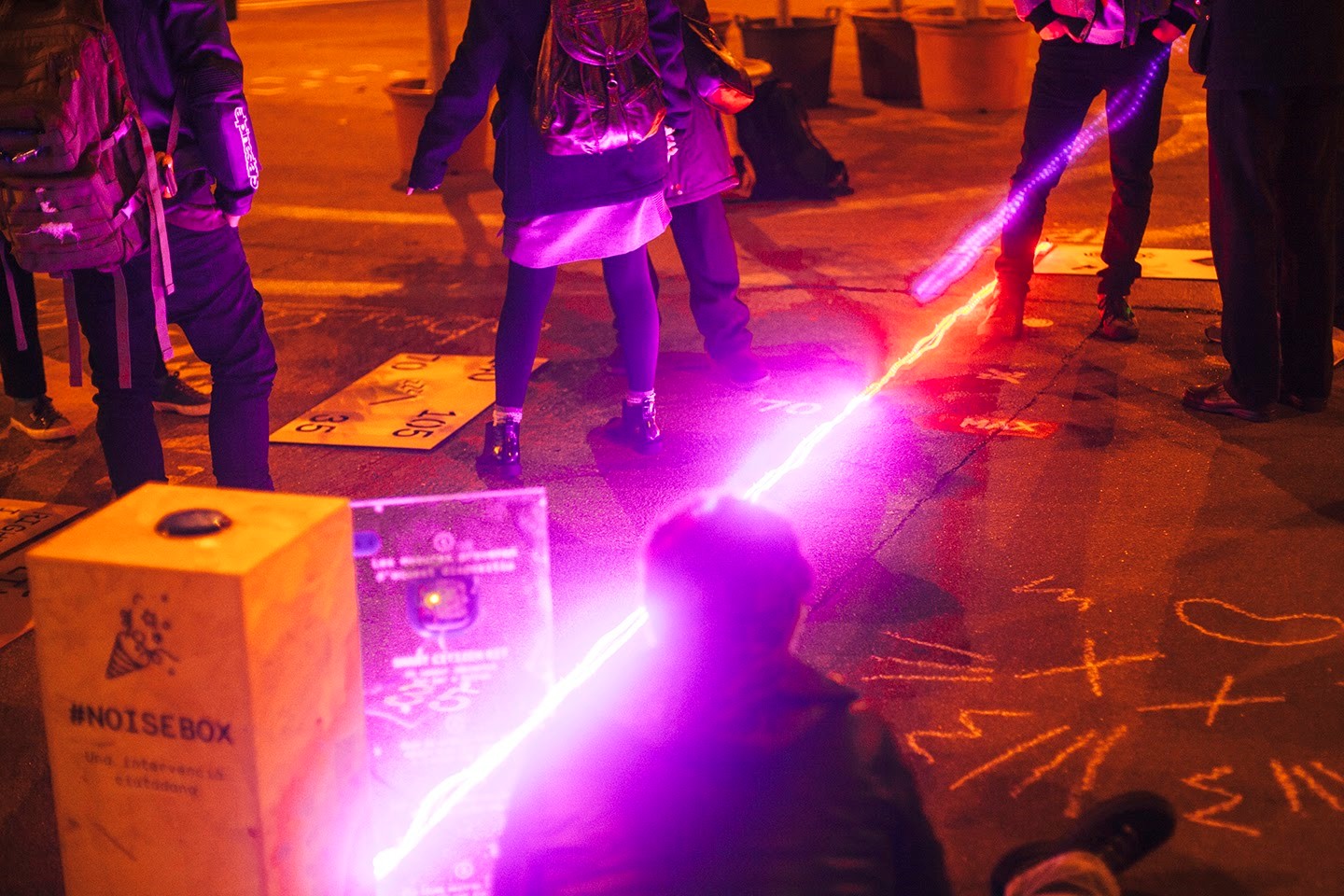 Participants of the Making Sense project in Barcelona take their interactive Noise Box to the streets of the city to communicate issues around noise pollution. © Making Sense

Lessons learned from the Landsense project

One of the aims of the LandSense project was to work with stakeholders such as local authorities, farmers and indigenous communities to raise awareness about digital technologies and new sources of data from Earth Observation. Working with the City of Amsterdam’s planning department was challenging, because it had limited budgets and was used to more conventional methods of data collection, i.e., surveys. Together with the planning department, LandSense developed the MijnPark app to gather information about citizens’ perceptions of greenspace, focussing initially on Rembrandt Park. The city of Amsterdam saw the value of this type of data and is now continuing to work with one of LandSense’s partners (the Free University of Amsterdam) to gather more data from citizens. Another example is working with farmers in Serbia, who were not used to using digital technologies as part of their farming practices and were also reluctant due to being very busy. By helping them to digitise their fields with information using the CropSupport app developed in the project, we showed them how they can obtain Earth Observation data in return, e.g. on crop health. Finally, working with indigenous communities in Indonesia, threats were reported using the NaturaAlert mobile app developed during the project, which was fed by alerts of new threats from the Earth Observation-driven change detection service. Although many had mobile phones, such an application was entirely new to them. As part of LandSense, we successfully bridged some digital divides while raising awareness on how the use of digital technologies and Earth Observation can benefit the communities. 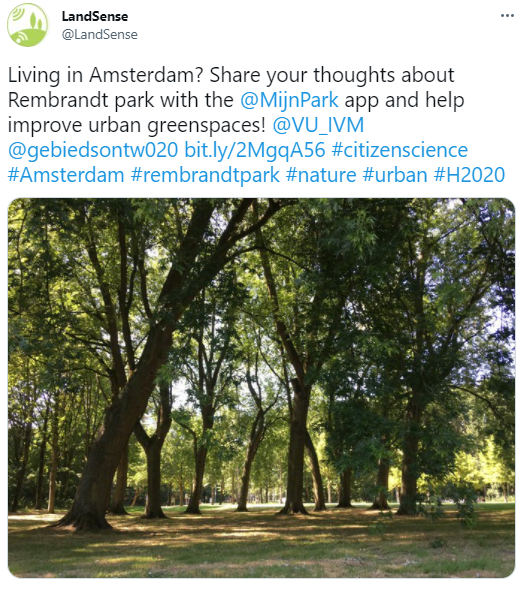 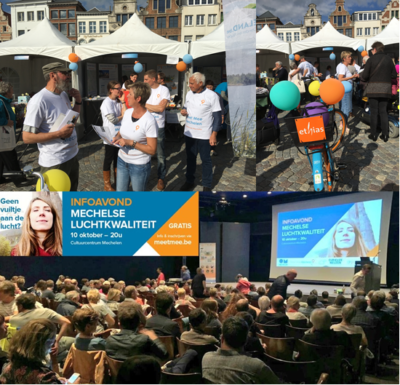 Using your Citizen Observatory and its results to achieve changes in the behaviours of individuals, groups or entire communities is a very ambitious impact to achieve, but not impossible. In some Citizen Observatories, the volunteers’ own behaviour becomes more sustainable as a result of their monitoring activities. For example, citizen participation in the Ground Truth 2.0 Citizen Observatory Meet Mee Mechelen, air quality monitoring activities, discussions with other Citizen Observatory stakeholders and the overall results have caused some participants to reduce their car usage. Especially for very short distances, they now walk, cycle, use public transport or ‘cleaner’ cars. Of course, not all members of the public will participate in your Citizen Observatory, so it’s important to reach the ‘non-participants’ and engage them with your results. Dedicated public events, especially those held in workshop style, can be a good way to share your results, spark discussion and help trigger new habits. These can be supported, for example, through community-driven social media challenges.

GROW example of change in water usage of growers 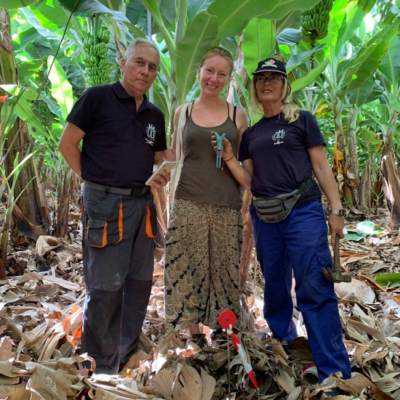 The GROW Observatory focused on soil monitoring and regenerative food growing places. GROW engaged 24 communities in 13 European countries to create an unprecedented network of 6,502 ground-based soil sensors and a dataset of 516M rows of soil data. One of the GROW Places was in El Hierro (one of the Canary Islands). The local government allowed access to public land for installing sensors; thanks to this involvement, sensors covered all the different climates of the island. In addition, because the resulting GROW soil moisture data were directly meaningful to the participants’ growing practices, they were able to interpret sensor data and take action.

For example, just a month after citizen scientists in El Hierro began their sensing activities, some farmers realised that they were over-irrigating their banana crops, and as a result they reduced the use of water for irrigation by about 30% right away.

“On our farm, we reduced water use by 30% just after a [sic] month of data collection. We found that the plants are happy enough with 40 min irrigation instead of 1 hour.” (Michal Mos, El Hierro Community Champion)

Changing policy implies understanding how the so-called ‘policy-making cycle’ works, as this has its own dynamic. Moreover, you need to identify the policy domain(s) that are linked to the environmental issue that your Citizen Observatory focuses on. For example, your issue may cut across one or more of the following: urban and rural planning, flood risk management, biodiversity conservation, natural resources management, and climate adaptation and mitigation. It’s good practice to involve decision-makers from public authorities who are in charge of implementing the concerned policy, or at least to inform relevant policy-makers during the set-up of your Citizen Observatory (more on how to engage key stakeholders here and here). 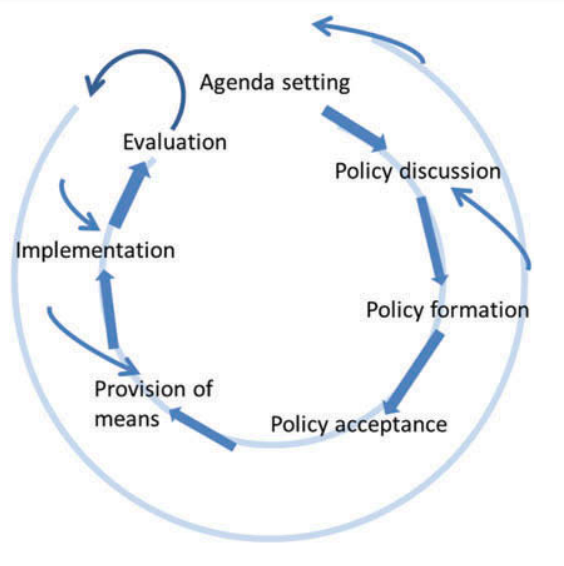 As your Citizen Observatory evolves, liaising regularly with policy-makers from the relevant policy domains can ensure that you remain up to date on developments in their respective policy cycle, e.g. such as upcoming public consultations on spatial planning in your city or region. This enables you to understand what evidence is required for making or changing policy and to feed relevant data, information and insights into the process.

Triggering change in policy adoption can be facilitated through an effective dissemination of the citizen science research results. But reaching the policy community can be challenging. Targeted results should be disseminated to decision-makers to facilitate the uptake of results. Sharing results with policy-makers can ensure that your research is applied and that it can lead to behavioural or collective change. In summary, it can ensure that your research has an impact. Inherent to a Citizen Observatory is to involve policy-makers from the beginning and to also keep them informed during the development of the project. You should incorporate their perspectives in order not to advance in separate ways.

When promoting your results with policy-makers, use dedicated events with dialogue and debate, and prepare clear and succinct policy briefs in which they can find the key impacts and implications of your project for their decision-making processes. The WeObserve project, aiming at moving citizen science into the mainstream, has developed two policy briefs and has organised and participated in several dedicated events where citizen science has been promoted in political agendas, in particular with regard to the UN Sustainable Development Goals. 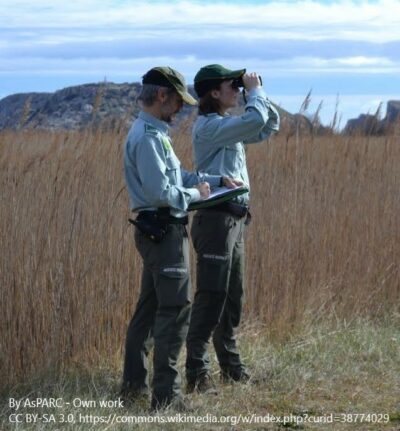 One of the Ground Truth 2.0 Citizen Observatories, RitmeNatura,  is dedicated to the observation of phenological changes in plants and animals due to seasonal evolution, such as the flowering of plants, the emergence or falling of leaves, or the migrations of birds. This observation needs to be carried out by an extensive network of volunteers in order to provide valid data that can be compared with the corresponding climatic series, in terms of geographical coverage, species coverage and temporal coverage. In the co-design process during which the observatory was created, following the guidance of the Ground Truth 2.0 methodology, citizens, scientists and decision-makers were brought together to share their needs and expectations in relation to the Citizen Observatory. Emerging from this process, a collaboration agreement was signed between two of the stakeholders, the Barcelona Provincial Council, in charge of the management of the Natural Parks network, and the Catalan Meteorological Service, in charge of the Phenological network of Catalonia. In the agreement, the park rangers who depend on the Provincial Council would serve in the Phenological Network as observers, incorporating their phenological observations in the park into their daily activities as rangers. In this case, the Citizen Observatory was the triggering force that facilitated the contact between the organisations and raised awareness among them about the importance of the phenological observation and the possibilities existing for the two institutions.

Example from the Brenta-Bacchiglione Citizen Observatory 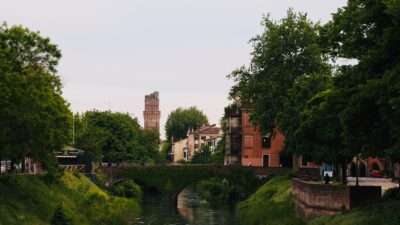 Example from the WeObserve project 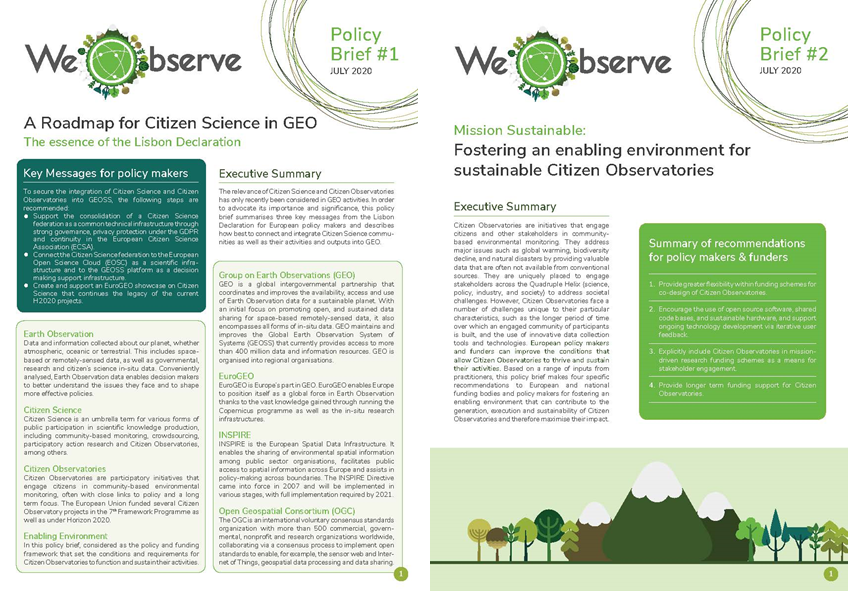 SCIENTIFIC PAPER: The WeObserve Impact CoP has developed a storytelling approach to capturing and communicating impact. To illustrate how this works, it has been applied to four case studies.

TOOL: The Future Newspaper Tool is an open-source downloadable tool that has been developed with community-led citizen science projects in mind. The tool can be used after the monitoring activities and helps the creative reflection process by asking participants to imagine a variety of desirable futures.

PROJECT REPORT: The  Making Sense Report on toolkit resources, methods for actionability and evaluation of findings from data gives an overview of the project and the methods that were used by the communities, including those for the planning and delivery of action and change making.

LEARNING RESOURCE: The online course Citizen Science Projects: How to make a difference on FutureLearn has additional information on how to achieve impact by triggering change.

I want to achieve impact with the Citizen Observatory results…

…by linking the Citizen Observatory to the SDGs